We've just returned today from our very first cruise. A 7 day Western Caribbean tour with Carnival Cruise Lines stoping in Cozumel, Belize, Isla Roatan, and Costa Maya. We had a great time celebrating my mother in-law's 60th birthday (which was last September, but never mind about that). Isaiah thoroughly enjoyed having the attention of his grandparents and two uncles.

We had no idea what we were going to do that day when we walked through the port area. A man holding a sign with pictures of tour options caught our attention and after a bit of discussion the monkey trip was selected. We followed him around to the tour office to pay and meet out guide.

Mrs Chris introduced herself and told us to wait while she went for the van. A little while later she pulled up in a mini van and we all piled inside. Isaiah fell asleep as Chris drove us around the city and talked about Belizean culture and her own upbringing as a poor farmer's daughter.

We soon drove out of the city and headed for the jungle. When we arrived at the location where we would see the monkeys everyone jumped out and went to meet our second guide. Mrs Chris said he was the best at monkey encounters.

The second guide's name was Manfred. He met us at the gate barefoot and with a big smile. Seeing that Manfred was barefoot Isaiah too quickly ditched his shoes. Keen to explore, Isaiah ran along the trails at the front of the group looking very much at home in the jungle. Chris commented to me, "He is a little Belizean boy running around with no shoes!"

On the drive back when I told Isaiah we were going "to the big ship", Isaiah asked, "Chris, too! Chris too please Mommy!"

Indeed we do. Isaiah did instinctively what missionaries can take years to accomplish. He just fit. And I cannot tell you how much this did for my heart. I have wondered and worried about how Isaiah would do in another culture. After Belize, I won't worry any more. 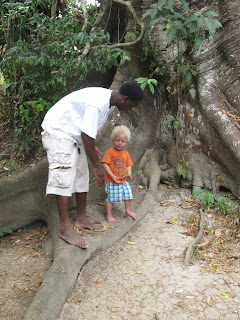 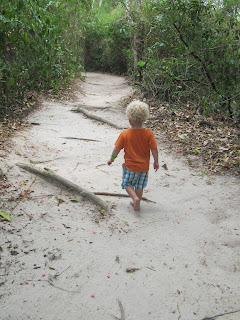 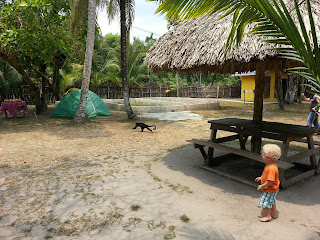 Posted by Anisha at 2:19 PM No comments:

A couple nights ago while out to eat I spotted a girl who used to live at the children's home. The mere sight of her, although far away, left me shaken again. When I saw her I was in the process of removing my on the verge of tantruming two year old who had just spit a mouthful of milk on the table. By the time I'd walked outside she'd already gone.

The last time I saw this girl she was being taken away by police for striking another child with a bat. At least I think it was a bat, I don't quite remember.

It was a Tuesday evening and like all my other Tuesdays I was on the way to the children's home with a bag of activities. As I walked out of my car this girl, lets call her Jane, ran over to me with a big smile on her face. She threw her arms around my neck and gave me a giant hug. "Hi sweetie! I'm so glad to see you!" I said, and we walked towards the front of the house arm in arm.

As we walked through the front door the staff saw Jane and exclaimed, "What are you doing out of your room?! Did you escape through the window?" They escorted her to the office to be supervised until the police arrived.

Inside the kitchen area I put my bag on the table. A few of the other kids came over to see what activity we were going to do. I pulled out duck tape and promised to teach how to make wallets, bowls, flowers, etc. Several kids sat down at the table, eager to get started. After a little while the staff let Jane out of the office and allowed her to participate in our activity.

The police arrived and Jane went with them to answer questions. Mark, the boy she hit, came in and suddenly I realized this wasn't just some little pre-teen spat. The entire right side of his face was covered with blood. He paced the room angrily and talked under his breath. His eyes were wild and his body tense, ready for a fight. I closed my eyes and began to pray.

Another police car arrived and as the officer entered the home he shouted, "Hey! Some kid is coughing up blood out front!" Everyone ran outside. James was biting the inside of his mouth hard in order to make it bleed. Then he would spit pools of blood in front of the police car. A someonecame back inside and said, "It's ok. It's just James. He always does that." No, it's not ok. I thought and continued to pray.

Eventually Jane came out. She was crying. The police took her away in handcuffs. The other kids told me she'd never been arrested before so she was just scared. It would be ok though, juvy isn't that bad.

I continued to pray and tried to teach the other kids how to make wallets. The whole experience was unreal. Nobody seemed the least bit upset besides Jane and Mark. The other kids acted like this was no big deal. My heart was in a million pieces.

I've often thought back on that night as both my best and worst night at the children's home. The best because with all the business of police questioning I actually got to spend a lot of solid quality time with the other children. The worst because Jane had been violent, Mark was hurt, and now Jane was gone.

In just two hours I'd experienced first hand the world in which these children live everyday and it was sobering. So when I saw Jane again the other day, even just for a second, it brought everything back. My heart again in my throat I am pushed back to prayer. Lord, Jane needs to know and see your love for her. I really hope she's does.

*Names of all children changed.

Posted by Anisha at 5:16 PM No comments:

A colleague at work recently told me about the adoption of his own two children. His son was adopted from an orphanage and the only male influence in his life had been an abusive one. For the first few months after adoption his son wouldn't even want to be in the same room with him. Only time and trust transformed this little boy's perception of who/what a father really is.

Although not to that extreme, our own experience with Isaiah learning to love his Papi has been somewhat challenging. At the full disclosure meeting, before we'd even met Isaiah, we were told "He doesn't really like men". Everyone around the table felt it would take Isaiah time to warm up to Ben. One individual told us, "I don't know how he'll react. He may be scared and run away. Just don't take it personally."

From birth Isaiah lived with a wonderful single foster mother. The concept of "Mommy" already existed, but what about a father? How do you show a two year old what a loving father is? I think it's quite telling that Isaiah chose to call Ben "Papi" right from the start. He had no clue what a "Daddy" was, but Papi made sense to him as one of the nurses Isaiah used to see in his foster home is Hispanic and called her husband "Papi".

To our relief, Isaiah didn't freak out when he met Ben for the first time. He was wary of both of us and mostly kept his distance. No crying or upset, just an uneasiness about who we were. I wonder what was going on inside that little head at the time. It must have been quite confusing.

Isaiah is still learning who his Papi is and the deep meaning of this relationship. Probably one of the most helpful things we have done to reinforce this relationship is to be affectionate in front of Isaiah. He may refuse to give Papi a hug or a kiss when asked, but I quickly and cheerfully chime in "I want one Papi!" After a few months of this Isaiah started to push through and say "No! My hug Papi!" and give a big cuddle.

At some point Isaiah started to ask for hugs and kisses from Ben. And more and more Isaiah seeks Ben out to help when he needs something or gets hurt. I
love watching this relationship grow. Even tonight, as Isaiah went down to sleep and I finished our nighttime prayer Ben said "Isaiah can pray too." I had no idea he'd taught Isaiah how to pray.

Undoubtedly, Father's have a big responsibility. Not just to love, lead, and provide for their families, but to be living breathing examples of our Heavenly Father. By learning to love and receive love from his Papi, Isaiah is also learning how to love and receive love from God. No words could ever express how much this fills my mommy heart with joy. 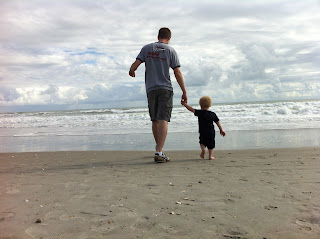 Posted by Anisha at 4:40 PM No comments: 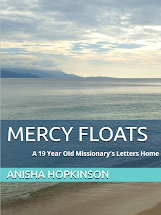